A manoeuvre is a notable variation in the moving vehicle such as:

Use outside of a built-up area:

Use in and out of a built-up area:

Signs made with the arm will take precedence over light signals. However, our first choice to show our intention to make a manoeuvre is using light signals.

When merging with traffic, you must drive at a speed that allows you to stop if you have to give way.

Other vehicles do not give way to the merging vehicle, but they should facilitate their merging.

1. As a general rule: Overtaking is done on the left.

2. You can overtake on the right when:

When overtaking IN A BUILT-UP AREA, you must leave a lateral space between you and the other vehicle, proportional to the speed and the width of the road.

When overtaking OUTSIDE of a built-up area, leave:

4. Obligations of a vehicle being overtaken:

Note: Vehicles more than 3500kg may not deviate onto the hard shoulder or use the right turn indicator to facilitate overtaking.

5. Ways to warn that you are going to overtake:

a) To the vehicle behind you with the turn signal or arm.

b) To the vehicle ahead (in front of you):

6. It is forbidden to overtake in:

a) Places of reduced visibility, except when lanes are marked with lines and overtaking is done without entering lanes of the opposite direction.

b) At level crossings and their vicinity, unless overtaking 2-wheeled vehicles.

c) In tunnels and underpasses if there is only one lane for the direction of the vehicle which is to be overtaken.

d) In pedestrian crossings and their vicinity, except:

e) At intersections, except:

8. It is not considered overtaking when one vehicle goes faster than another in these cases:

There are 3 types of safe distances:

If the speed is doubled, the safety distance increases four times.


Reverse: forbidden on motorways and dual carriageways. On other roads it can be done but only in two ways:

Vehicles driving around a roundabout have priority over those which are trying to join them. 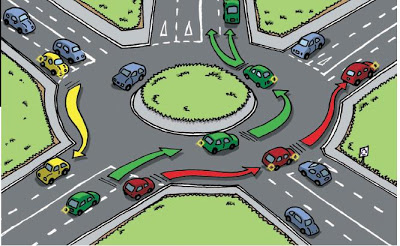 STOP: Voluntary immobilization that lasts less than 2 minutes and the driver does not abandon the vehicle (but may get out).

PARKING: Voluntary immobilization lasting 2 minutes or more, or lasting less than 2 min and the driver ABANDONS the vehicle.

Motorways and dual carriageways: forbidden to stop and park except in designated places.

Conventional roads: you can stop and park off the roadway and onto the hard shoulder if it is passable. Always on the right side.

Urban roads and cross-town routes: you can stop and park if there is no rule that prohibits it:

4.6.2 Stopping and parking is prohibited:

1. Stop the engine and make sure the vehicle cannot be used without authorization.

2. Turn on the hazard warning lights during the day and night.

4. The vehicle should always be towed away on motorways and dual carriageways.

We use cookies on this website, mainly to provide a secure browsing experience but also to collect statistics on how the website is used. If you're happy to accept these cookies, simply continue browsing. Accept
677 64 10 04