Appropriate speed: adapting your speed to traffic conditions, visibility, the road, the condition of the vehicle and the driver (this would be like the perfect speed).

Inappropriate speed: not adapting your speed to the circumstances. This is very risky.

Excessive speed: exceeding the speed limits of the road.

Speed limit: the maximum speed allowed on the road.

Abnormally reduced speed: traveling below the minimum speed. It is prohibited if there is no reason. You must travel in the right lane or shoulder. (Breakdown, traffic jam, heavy fog on the road, etc.)

Design speed: the maximum safe speed that can be maintained over a section of road in favourable conditions.

3.3 Speed should be reduced in:

50km/h on urban roads because:

90-100km/h on conventional roads because:

120km/h on motorways or dual carriageways because: 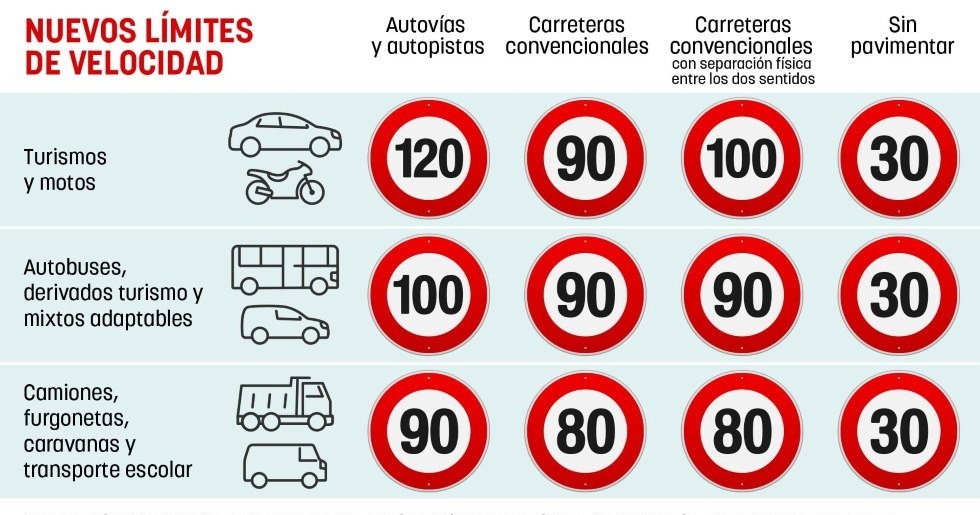 Differences between conventional highways with 100 km/h and 90km/h speed limit:

Maximum speed is reduced by 10km/h for: School transport on intercity roads (only) and the transport of dangerous goods on urban roads and inter-urban routes.

If a 2-wheel vehicle is towing a trailer, maximum speed is reduced by 10%.

We use cookies on this website, mainly to provide a secure browsing experience but also to collect statistics on how the website is used. If you're happy to accept these cookies, simply continue browsing. Accept
677 64 10 04