Find out what are the requirements and documents that you are going to need to obtain a Spanish driver's license of any category, whether you are an European citizen or from outside the European Union, from the USA or also from Canada.

There aren’t many things in this world that can be so intimidating and hard to get as a Spanish driving license. Just to give you an idea, one American expat, Sal DeTraglia from Sal DeTraglia’s Virtual Tapas Bar, compares this process with “trying to solve Fermat’s last theorem while sitting on death row in a Texas prison”.

With that picture in your mind, you really have to know how figure out all the issues that you may face in order to get a Spanish driver’s license. Here’s how. 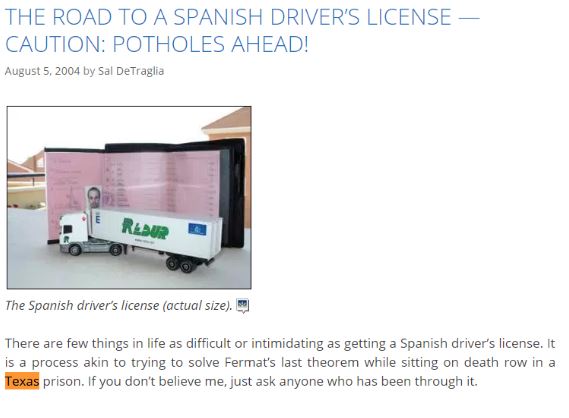 European citizens are the luckiest ones. They do not have to go through many of the inconveniences as others to get a valid driving license in Spain. The same happens if a Spaniard wants to get a driver’s license in another EU country.

If you have a legal residence in Spain, then you have to get a driving license that works in Spain in order to drive there. You have two choices here: getting the license you already hold converted by putting some stamps on it, or getting a new one in Spain.

Although some people that come from a non-EU country state that they have used their own license for years with no issues whatsoever, this is not something you should try, as the fines are quite expensive.

For US citizens and residents

You have to understand that each state in the USA sets its own rules, and that’s why foreign countries establish agreements with individual states.

This means that if your driver’s license was issued in New York, for example, it is valid in Spain for one year. The same does not apply if your license is from Massachusetts (but it’s possible that a police officer might not know whether the license is valid or not here).

If you are Canadian and you have a driving license issued in that country, you need to have either the international driver permit or the provincial driving license. Both of them are going to be valid for a year in Spain. Once you get permanent residence in Spain, they are going to be extended for six additional months.

You can find the International Driver’s license at some registry office, or at CAA offices (or the equivalent in the province), by simply presenting your license issued at the province you were living in in Canada. You must invest at least half an hour, and CAD $30.

In order to get a valid Spanish driving license, you must: register at a driving school, pass a medical test, and pass both a written and practical test.

That’s it? In theory, yes, but at this point you should know that it is not as easy as it may sound. After all, we have to remember what De Traglia says about Fermat’s theorem. Anyway, it’s always worth it to get one since the roads in Spain are some of the best in Europe.